(Published in the Ontario Bee Journal)

Feeding bees prebiotics and/or probiotics may mitigate Nosema disease and strengthen the populations of honey bee colonies. In a series of laboratory and field experiments, Daniel Borges, Pegah Valizadeh, Shane Klassen, and William VanBlyderveen – former students at the University of Guelph’s Honey Bee Research Centre (HBRC) – in collaboration with researchers from the OBA’s Technology Transfer Program, tested a number of prebiotics and probiotics and found that several of them improve honey bee health and may control Nosema ceranae infections in the midgut of honey bees.

Prebiotics are non-digestible food ingredients that benefit animals by selectively stimulating the growth and activity of certain microbes in the digestive tract while inhibiting others. For example, chitosan, a form of chitin from crustaceans (shrimp and crab shells), is a prebiotic that can be both directly antimicrobial and can stimulate the honey bee immune system. Many components of essential oils are also prebiotics, such as eugenol from clove oil or carvacrol from oregano oil. Flavones can also be prebiotics, such as naringenin (Boc Sciences) from citrus fruits that has anti-inflammatory and antioxidant properties.

Probiotics are living microbial food supplements that benefit animals by altering the balance of intestinal microorganisms. One example is Enterococcus faecium, which is found in the intestines of a range of animals, including honey bees. Enterococcus faecium produces lactic acid in the midgut of the honey bee, which causes thickening of the peritrophic membrane in the ventriculus epithelium. As Nosema must go through this membrane to infect epithelial cells, this may be a mode of defense against Nosema infection. There are many commercially formulated probiotic products, such as Protexin (Protexin Probiotics), which contains a single strain of E. faecium marketed for improving the microbiota and gut health of farm animals. However, few prebiotics and probiotics have been tested in field colony studies and, therefore, we know little about their practical use and benefits at the colony level.

Laboratory studies using caged bees showed that the prebiotics eugenol, chitosan, and naringenin, and the probiotic Protexin, reduced N. ceranae infections by more than 60% and increased the lifespan of bees compared to infected non-treated bees. Therefore, based on the results of laboratory experiments, field experiments were conducted with these three probiotics and the probiotic Protexin. The four compounds were provided to colonies in sugar syrup or protein patty either in spring or fall and were evaluated for their effects on Nosema ceranae infection, colony population, honey yield, and winter survivorship. The experimental setup consisted of two trials conducted in two consecutive years.

Spring colony treatments were provided in one-pound protein patties that were prepared by mixing the following ingredients according to the recipe of the Ontario Beekeepers’ Association Technology Transfer Program: 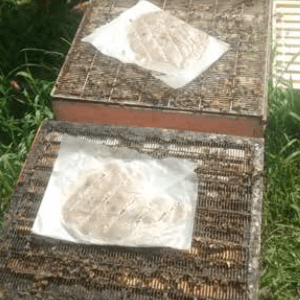 Figure 1: Protein patties in wax paper containing a prebiotic or a probiotic treatment. The patty is placed on top of the frames of the hive’s lower brood chamber.

In the second year, the two most promising products (naringenin and Protexin) were further tested with a larger number of colonies per treatment and only protein patty used in the spring and sugar syrup in the fall. Protexin and naringenin decreased N. ceranae infections by 87% and increased the population of adult bees after spring treatment. While fall treatment with Protexin reduced winter colony mortality by approximately 10%, there were no significant differences between treatments and the control. However, surviving colonies in the spring that had been treated with Protexin and naringenin the previous fall were significantly more populated and had lower Nosema ceranae spore numbers than control, non-treated colonies (Figure 2).

Clearly, Protexin and naringenin were the most promising candidates for controlling Nosema infections and for promoting honey bee populations. These compounds may have other potential benefits for honey bee health, warranting further investigation and use in field colonies.

Detailed information about the lab and field studies summarized above can be consulted in the following publications:

Figure 2: Colonies treated with Protexin or naringenin were significantly more populated and had lower Nosema ceranae spore numbers than control, non-treated colonies. This picture shows how a team of researchers from the OBA’s Technology Transfer Program evaluated colony populations.